Django is a Python web framework that allows you to create interactive websites and applications. You can easily build Python web applications with Django and rely on the framework to do a lot of the heavy lifting for you.

It’s fast and designed to help developers get their apps up and running as soon as possible. SQL Injection, XSS, CSRF, and clickjacking are all common security errors that Django helps developers to avoid.

This tutorial will show you how to install Django on an Ubuntu 18.04 server. After installation, you’ll create a new project to serve as the foundation for your website.

Django supports four main databases (PostgreSQL, MariaDB, MySQL, Oracle and SQLite) and community libraries support other popular SQL and NoSQL databases at various levels. We recommend that you select the same database for both production and development, even though Django brings many of the differences in the database using its Object-Relational Mapper (ORM).

Depending on your needs and how you want to set up your development environment, there are different ways to install Django. These have various advantages and any one method might accommodate you better than others.

Some of the various methods are:

The process is very simple if you want to install Django using the Ubuntu repositories.

Step 2: Now check the version of python you have installed in your Ubuntu server. You can check it by using:

Step 3: Now, you can install Django on your system:

Step 4: You can check the installation with:

Output:This results in a successful installation of the software. You may also find that the version of Django is not the latest stable version.

Install with pip in a Virtual Environment

Django can be installed flexibly and easily on your system within a virtual environment. We’ll demonstrate how to instal Django in a virtual environment that will be created in the standard Python 3 library with the venv module. With this tool, you can create virtual Python environment without affecting the rest of the system, and install python packages. Thus, regardless of conflict with the requirements of other projects, you can select Python packages on a project basis.

4. Once the pip has been installed, the venv package can be installed:

Step 7: This will instal standalone python versions and pip in your project directory into an isolated directory structure. A directory with the name you specify will be created to hold the file hierarchy where your packages will be installed.

You can install packages into the isolated environment by:

Step 8: Your prompt should update to show that your virtual environment is now in place. It will look something like (my env)[email protected]:~/newProject$.

You can use pip to install Django in your new environment. Whatever version of your Python, when you are in your virtual environment you should only call pip. Also note that since you install locally, you won’t have to use sudo:

Step 9: You can verify the installation by:

Note that the version shown here may differ.

Step 10: You need to issue the deactivate command from anywhere on the system to get out of your virtual environment:

Step 11: The conventional display should return to your prompt. If you want to work on your project again, reactivate your virtual environment by returning to your project directory and activating:

You can download and instal Django from its Git repository if you need a development version of Django. Let’s do this in a virtual environment.

Step 4: Once the pip has been installed, the venv package can be installed:

Step 7: Next, create a virtual environment for your Python version in the project directory using the python command.

Step 8: You can install packages into the isolated environment by:

Step 9: The repository can next be installed with a pip. In “editable” mode, the -e option is installed and required for installation from version control:

Step 10: Verify the installation by:

You can start building your project with Django. We will discuss how to create a project and test it using a virtual environment on your development server.

Step 1: Start by creating a directory for the project and switch to it. 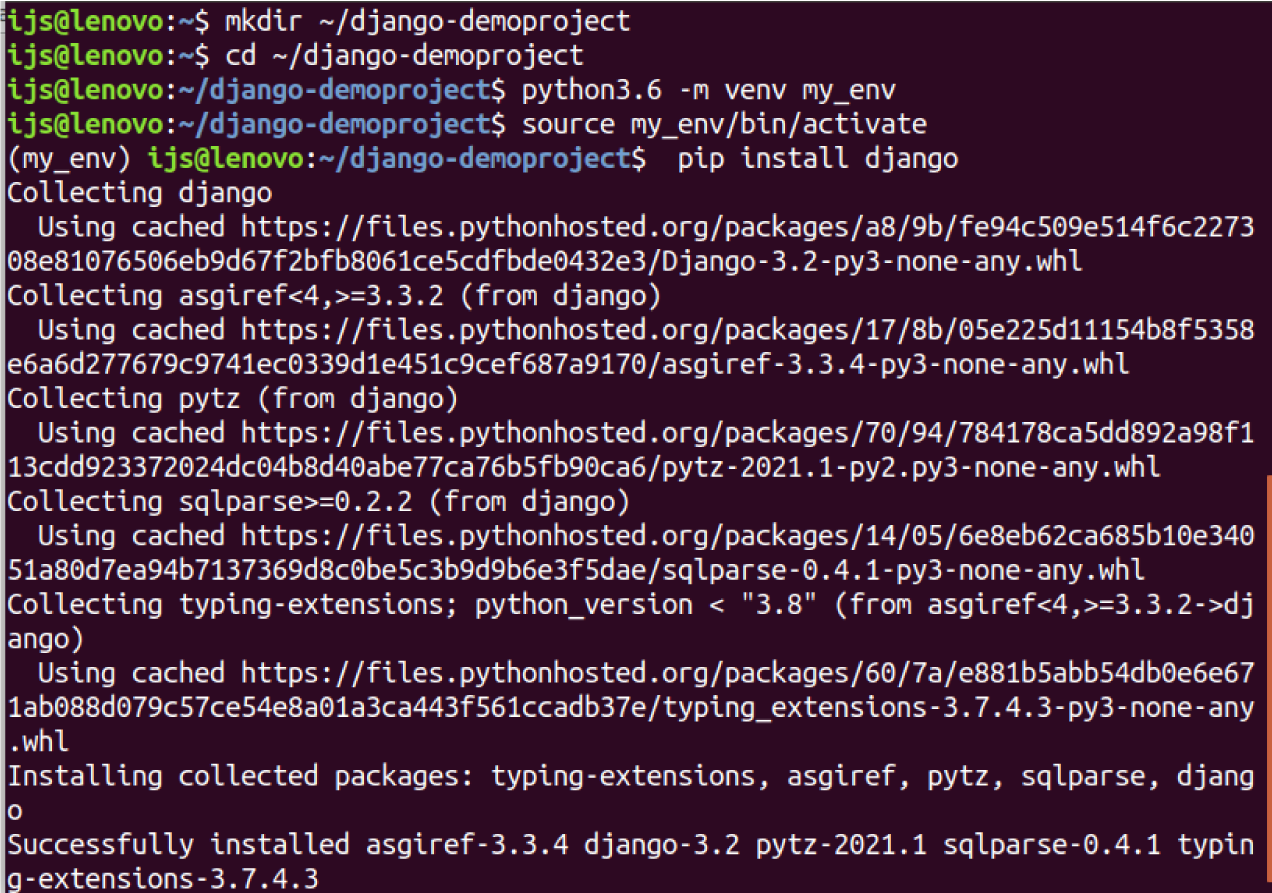 Step 5: You can use the django-admin command to build your project. with startproject. You could replace this with another name; however, we’ll call our project djangoproject. In your existing working directory, startproject will create a directory containing:

Step 6: To migrate the database, using the manage.py command to migrate. Migration applies any changes to your database scheme that you have made to your Django models.

To migrate the database use: 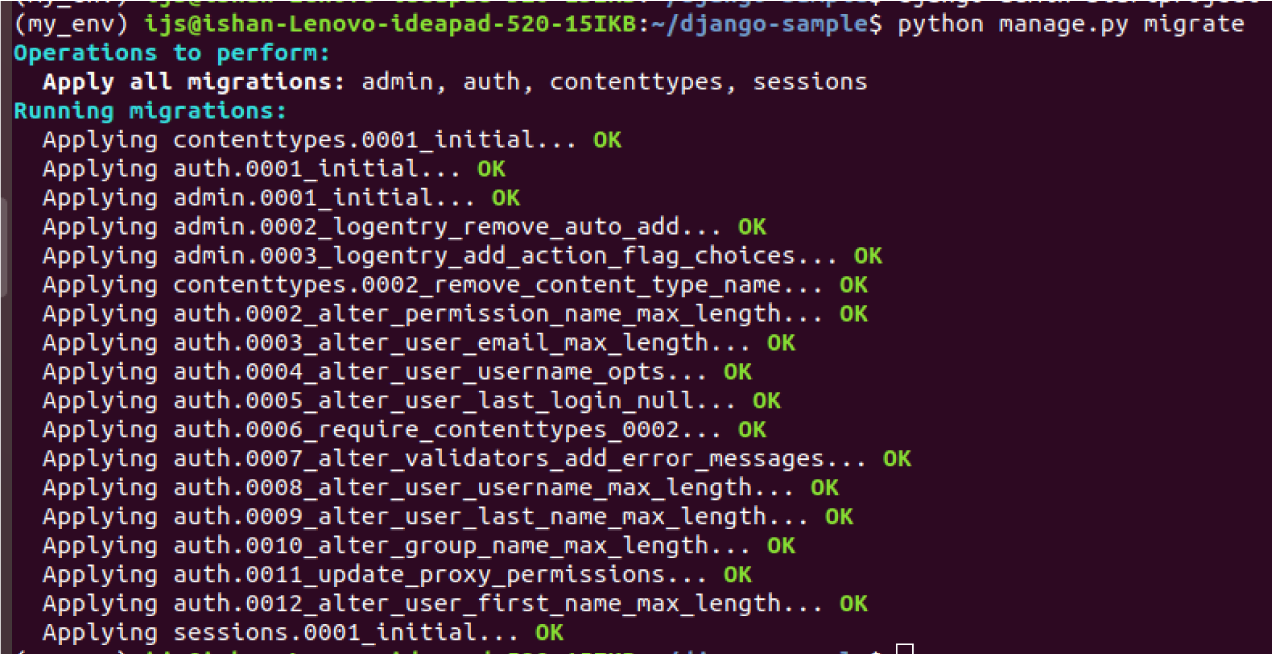 Step 7: Let us create an admin user to use the admin interface of Django. Let’s do this with the  createsuperuser command:

Step 1:  You can start the development server in Django to see what a new project looks like. You should use it exclusively for development. Be sure to follow Django’s deployment guidelines if you are ready to deploy.

We will use the created folder and navigate into it.

Step 2: You can use the django-admin command to build your project.

Step 3: We can use the manage.py and the runserver command from this folder, as shown.

Step 4: After the server running, you can view the site through your browser by navigating to the following URL: http://127.0.0.1:8000/ : A site that looks like this should be visible:

Step 5: You can add /admin/ to the end to access the admin interface:

When the default site is finished, the development server can be stopped by typing CTRL-C into your terminal.

1. If you have the system installed widely, sudo should be used, and pip is enough if you have it in a virtual environment.

2. If installed with apt, then use:

Django should now be installed on your Ubuntu 18.04 server to create powerful web applications. You should also know how to launch the developer server in a new project.

With django-admin startproject a new website can be created and executed on the web-development server in your browser (python3 manage.py runserver).